Every Object Tells a Story

The first time I ever went to a flea market, I was 22. I was about to graduate from UC Berkeley. I lived on Howe Street in Oakland in the upper flat of a duplex with my boyfriend at the time and his mother. I was waitressing at Skates on the Bay back then to pay for my education and my apartment, while also supporting myself and two of my younger siblings.

My boyfriend’s mother, who was beginning to become a mentor, impressed upon me the value of a well-appointed apartment by the way she had decorated it for all of us. I was deeply affected by the feeling she created through her curation. I wanted to know more about this skill she clearly had. So when she invited me to go with her to the Sausalito Flea Market to hunt for treasures, I was an immediate yes.

At that time, she and I were looking for things to spruce up our apartment, to reclaim it as a bohemian, feminine bachelorette pad, since by then, my boyfriend/her son had moved out.

I’ll never forget the thrill I felt when I walked through the gate that first time. Quality vintage pieces were everywhere. Potters, painters, and woodworkers selling their one-of-a-kind wares. It was magic. The air buzzed with the energy of treasure-seeking and as I wandered through the aisles I fell into what I can best describe as a trance. The seeds of my future self were planted that day!

In this blog post, I am sharing stories about a few of my favorite finds over the years. Some I’ve kept, some I’ve sold, some I’ve given away… and every one of them holds a story that is meaningful to me. 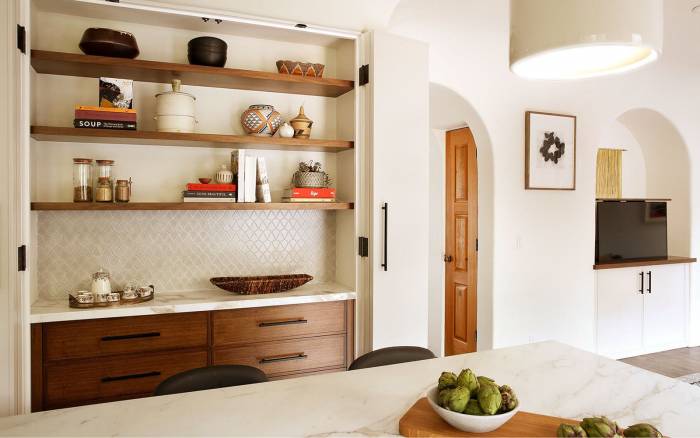 A beloved piece of pottery in a Mediterranean kitchen. Photo Credit: Mo Saito

Twenty-five years ago, I worked with a waiter who told me that whenever I travel, I should get a piece of art or clothing that I will want to keep forever. ⁠The cream jar on the shelf in this photo is one such object. I got it in Chicago, the first year I became an interior designer, while on a trip to NeoCon (a huge, annual trade show for the design industry).

The potter who made that jar was selling so many beautiful things, I couldn’t decide… until I did. Now I use this jar on photo shoots every so often. (Take a peek at the portfolio on my website, LMBinteriors.com, to see if you can spot the instances of where and how.) 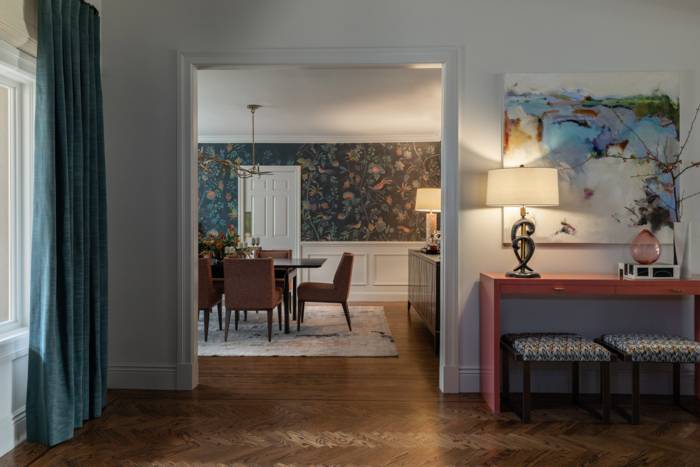 While treasure hunting with Darshan at Remember When, an antique shop in Cayucos, California (near San Luis Obispo), I remember exactly the moment when this lamp caught my eye. I was like, “Wait! Does anyone realize how good this is?” The lampshade was awful, but the body was this uniquely carved ebonized wood. It had quintessential mid-century-modern vibes.

I picked up the lamp and carried it across the store to Darshan, to ask if it was really as good as I thought it was. Darshan agreed, “It’s perfect! You should have it for your house!” And so, I bought it, replaced the lampshade, and brought it home.

Soon after, while styling a client’s house, I brought this lamp with me, and placed it on a glossy, pink console table in the hallway – and in that moment I knew that my house was never going to see it again. It was so perfect there, that I simply had to offer it to my client. 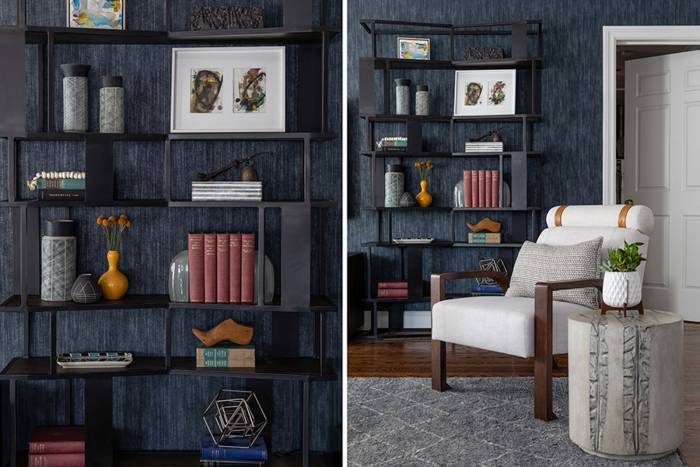 A somewhat ordinary shoe form, not an ordinary story behind it. Photo Credit: SEN Creative

Many designers will tell you that when they go to style a photoshoot, we bring items that come from our own homes for the day, and they end up staying at the client’s house. I absolutely do not let something stay unless I feel that these are the right people for that object.

Shoe forms like this one are fairly common and easily found. However, this one is very special to me because it belonged to my mentor (the mother of my ex-boyfriend from the beginning of this story).  A wooden shoe form wouldn’t seem like a treasure to many people, but because of the meaning behind it, it became a treasure to me. The clients who were gifted this treasure are so dear to my heart, and I know they will treasure my treasures. 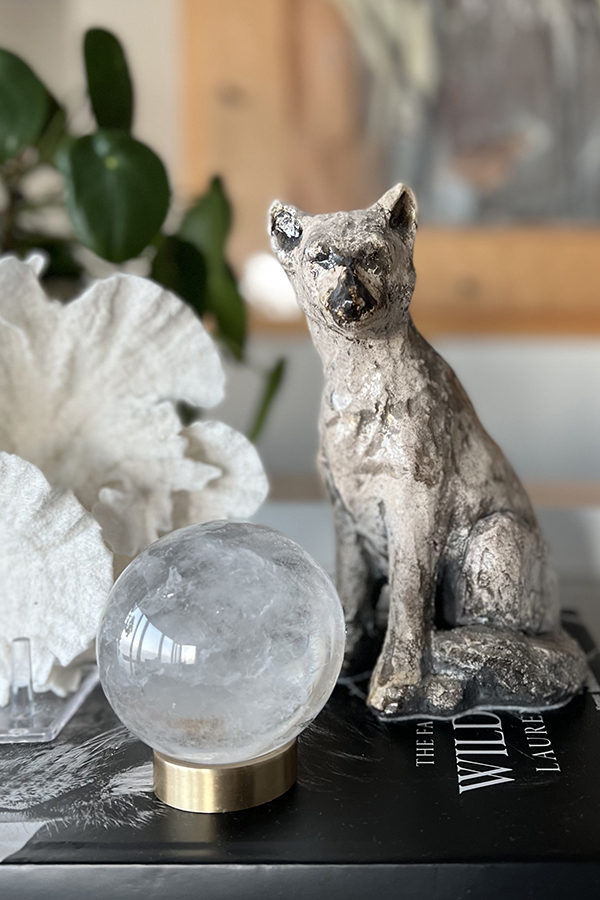 One animal that I always feel very connected to is the white wolf. Decades ago, on a treasure hunt in Auburn, I came across a wolf sculpture that seemingly jumped off the shelf into my hands. Once upon a time I was a potter, and I could tell that this wolf had been raku-fired. Raku is a pit-firing method that adopts the patina of seaweed, rocks, and dirt. It takes on all of these elements that feel earthy, while at the same time there is an overall effect of elegance.

The thing I fell in love with was the look on its face:  woeful, pondering as if he’s savoring a sad memory. This sweet little thing stops me in my tracks and stirs my heart when I look at it.

Recently I had my friend Anna over, and from across the room I could see her connect with the sculpture, too. She asked me about it. Telling her the story of how I found and fell in love with this treasure gives me a way to share my connection to the piece, with her; and our mutual appreciation of it also connects us. 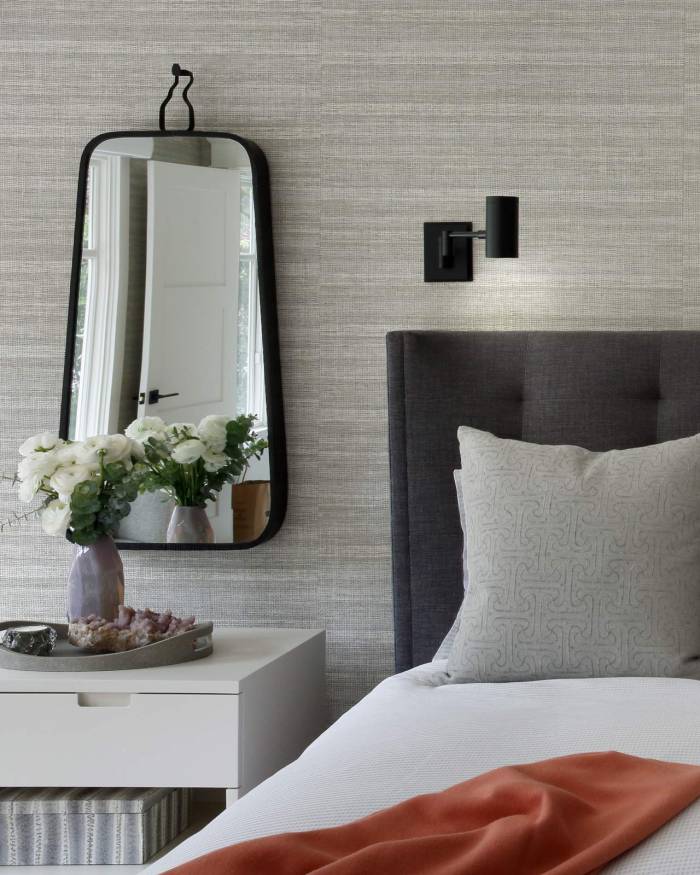 For a while, my son wanted to become a surfer. I met with him in Bolinas one day after a surf session. This enchanting woman was standing outside of the Bolinas Country Store behind a table full of gems and crystals. My inner hippie couldn’t resist the sparkling objects. I left with the crystal pictured on the nightstand. I simply couldn’t part with it once I found it.