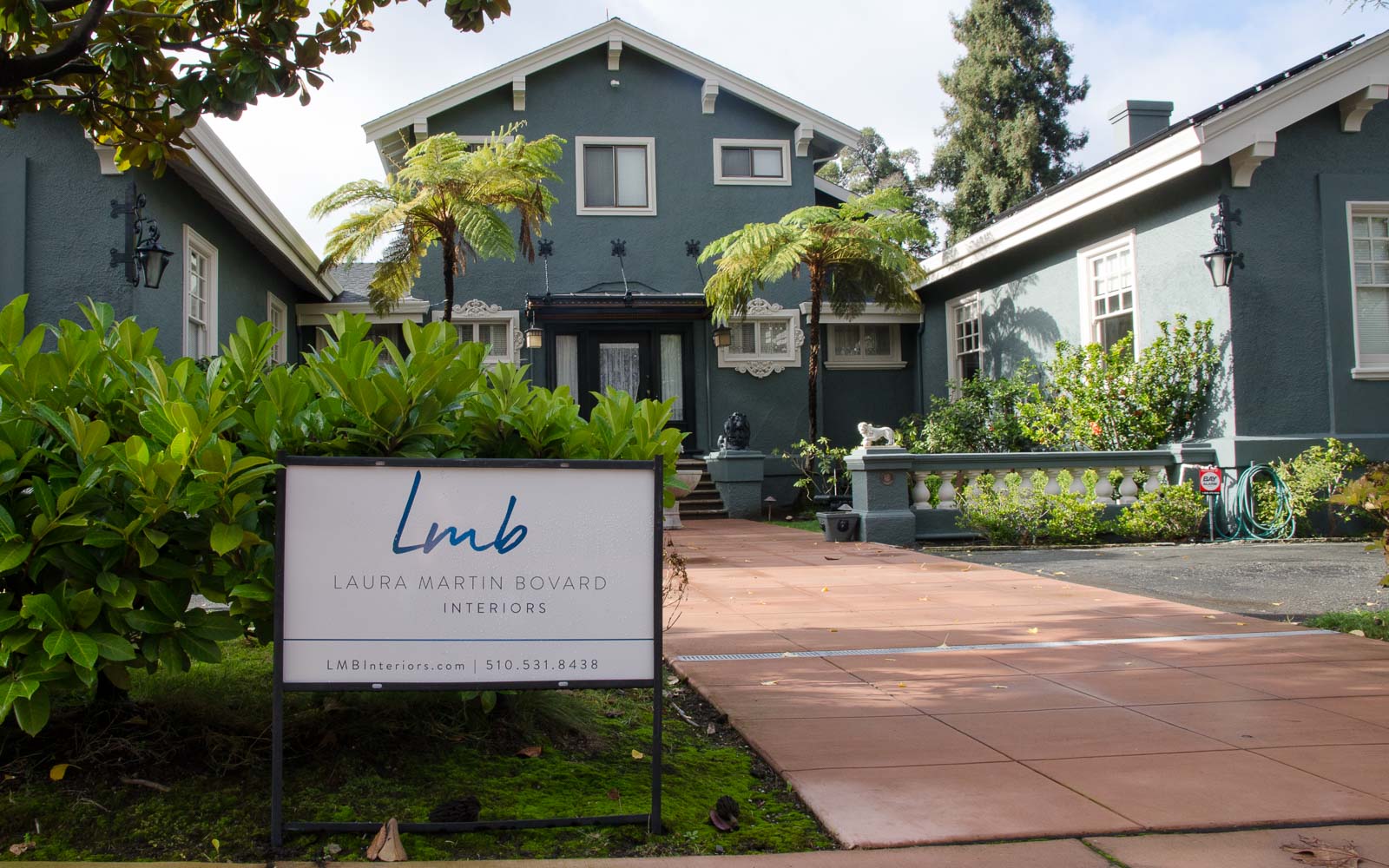 When I received the call that Patti and Art Edmonds needed help selecting paint colors for the well-known home of Carolyn Renton, Patti’s late mother, I was simultaneously excited and feeling a healthy dose of trepidation. The house is located at an entry to the city of Piedmont, at the corner of Highland and Moraga Avenues — one of Piedmont’s busiest intersections; it is literally seen by the entire community.

Exterior colors are very high stakes. The choices a homeowner makes can impact an entire street, as well as the neighborhood. Realtor Julie Gardner referred me for this project after the Edmondses had met with two other color consultants, but were not satisfied with their options. 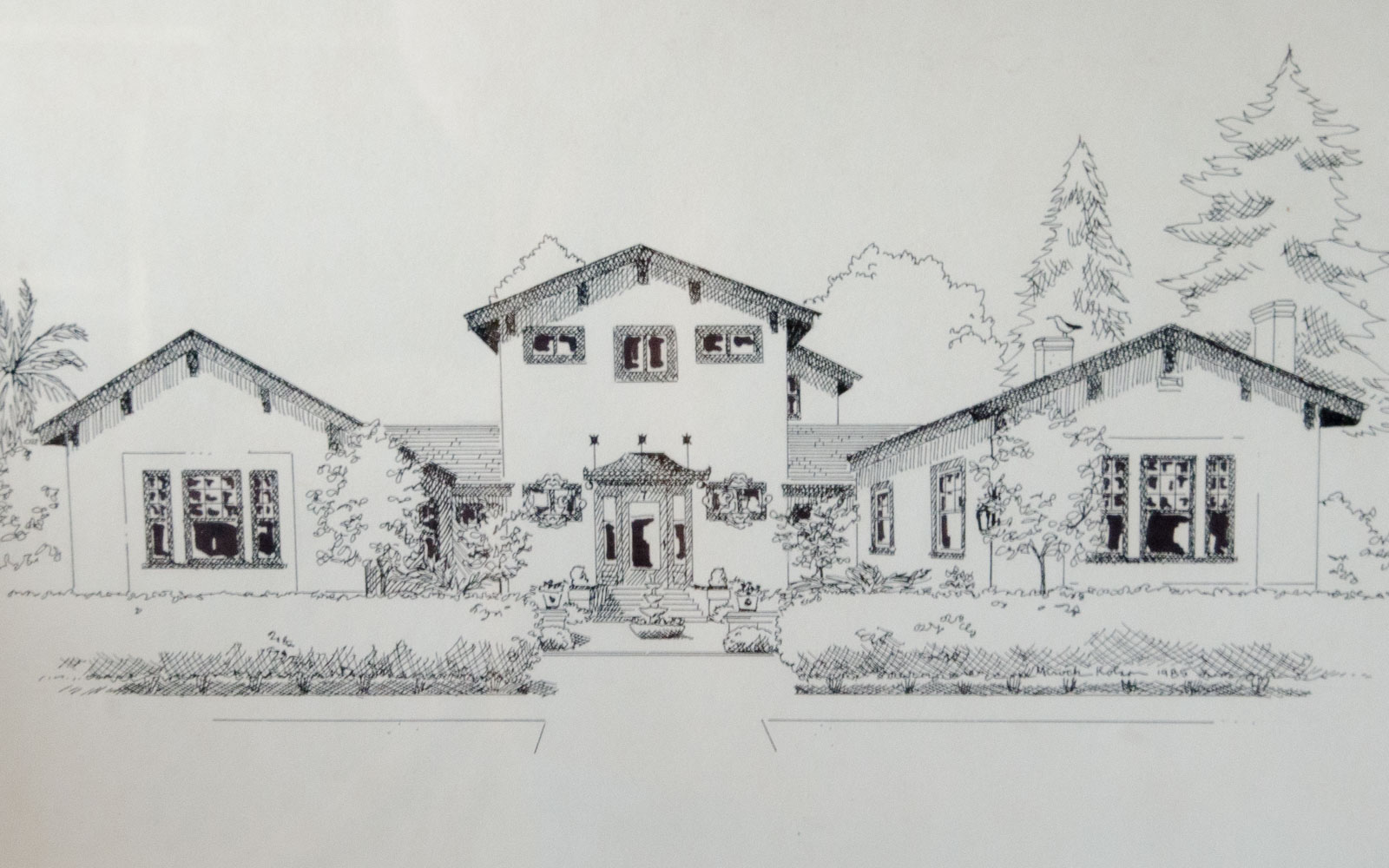 An ink drawing of the home from several years ago, reflecting a previous paint color scheme, created and gifted by a family friend.

While a little vulnerability is only human on such a visible project, I was calmed by knowing I would be working alongside painting contractor Matt Jessee (MB Jessee Painting), an expert with both painting and restoration, an excellent artisan and a longtime industry colleague with whom I enjoy collaborating.

Our process necessarily encompassed choosing the entire home’s exterior color scheme; and one of the key decisions for the Edmondses was what color to paint the large, iconic lion statues guarding the front of the house. 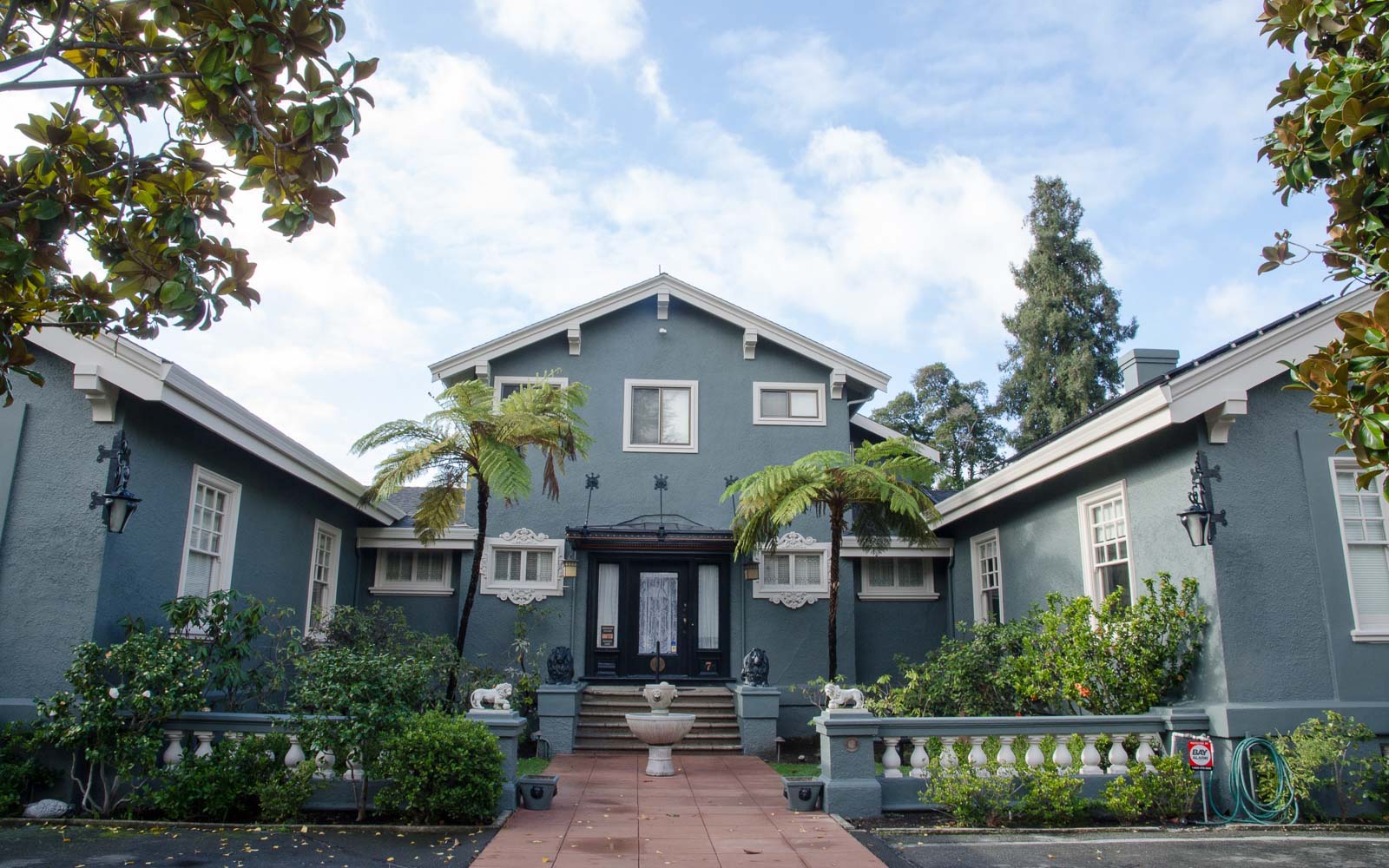 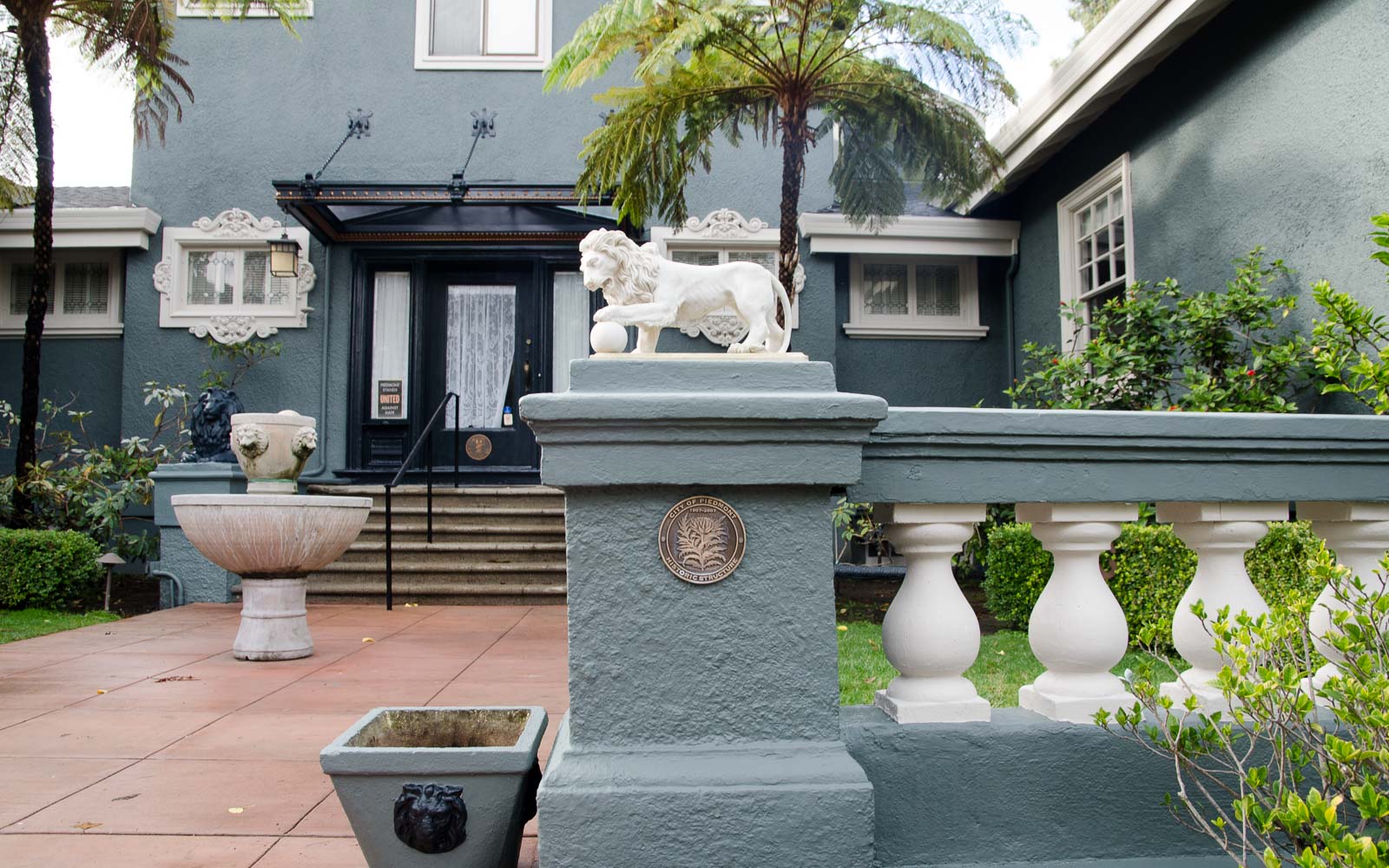 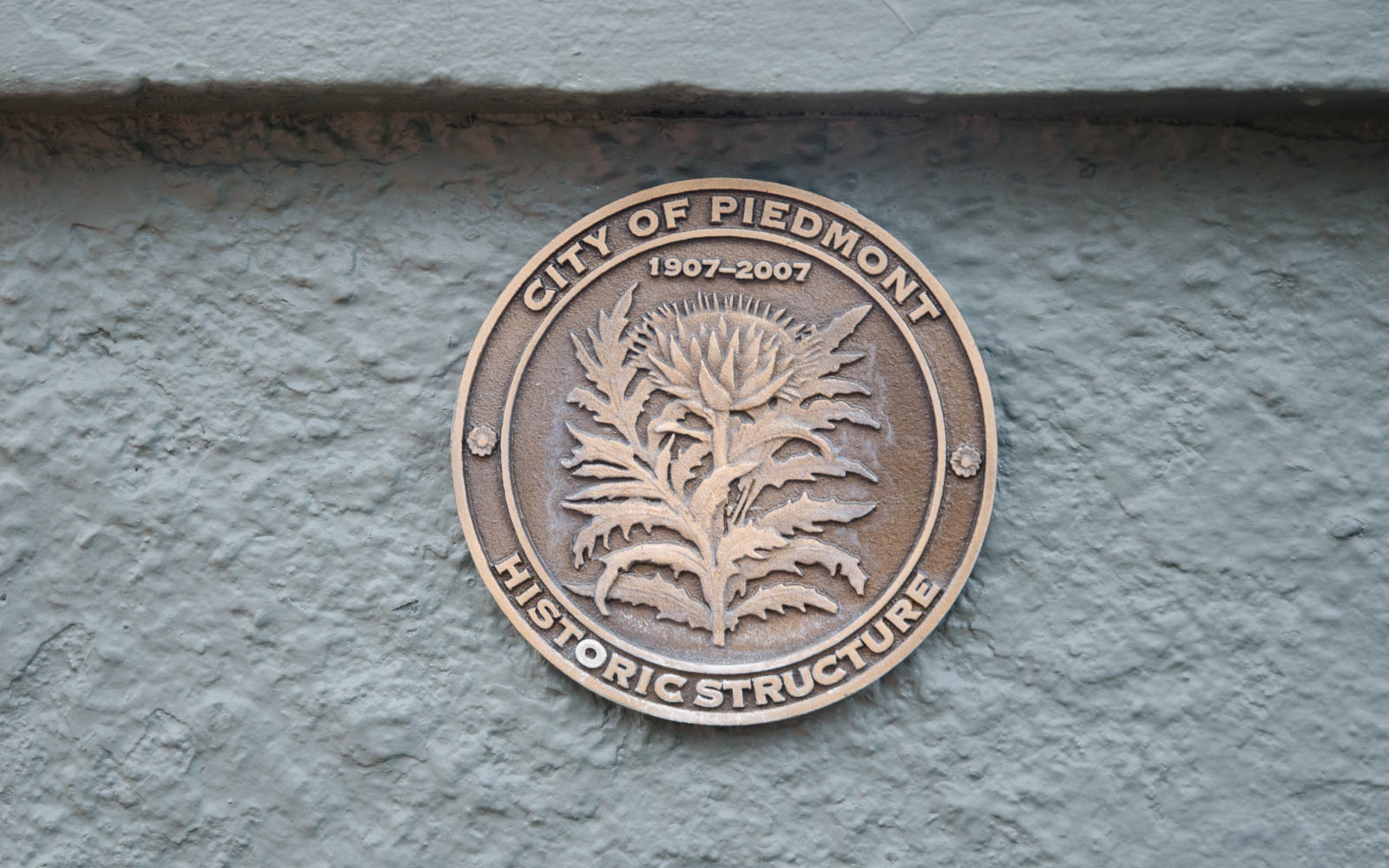 There are petite white lions at the start of the walkway that were going to remain natural stone, but I knew that the large pair flanking the front door should be black.

Patti and Art weren’t sure at first. We also considered painting them white, or bronze — to match the bronze detail in the portico. I presented photoshopped images of the three versions to help them decide. Fortunately, they, and the neighbors, were happy with the results! 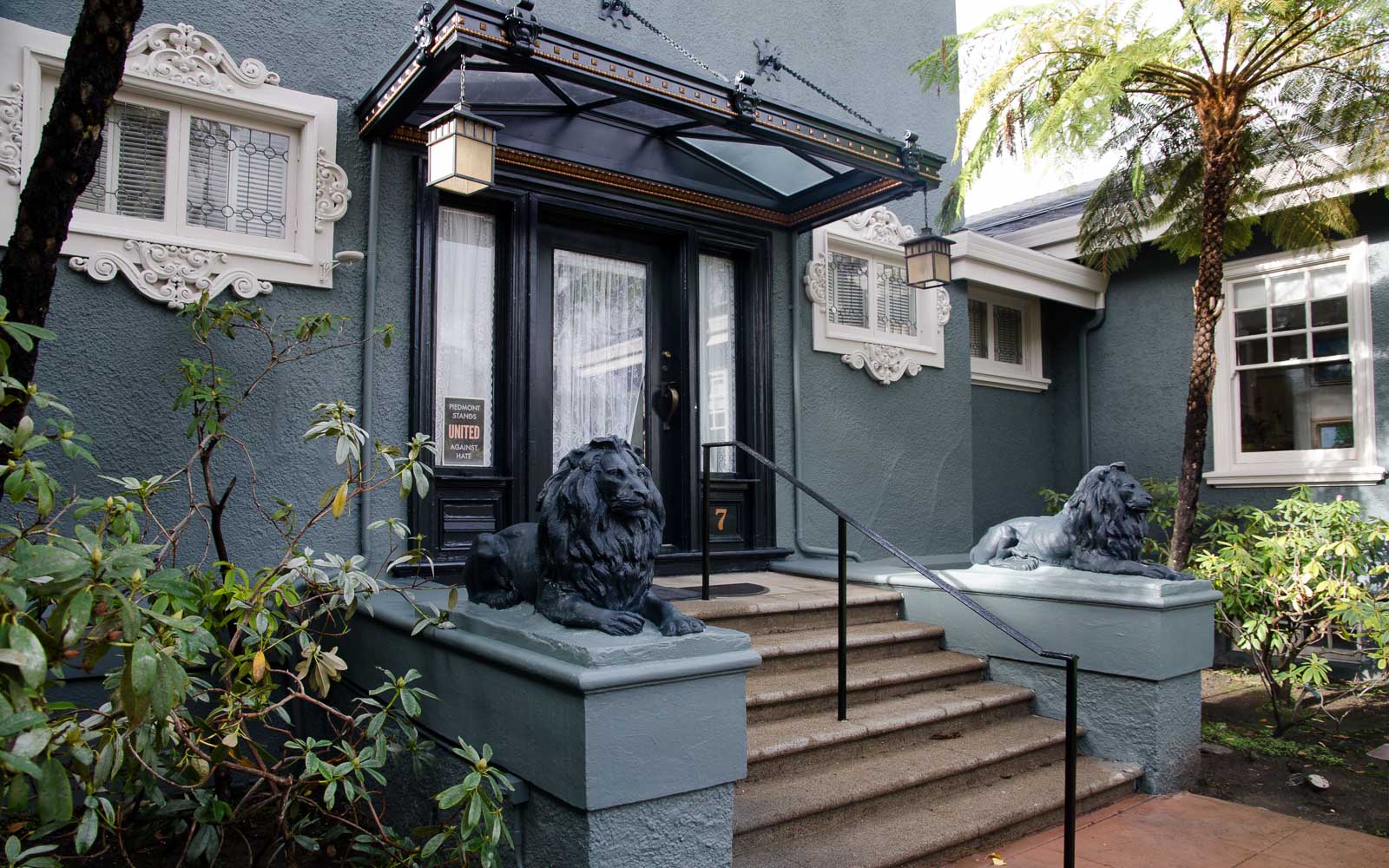 The final decision on everything was collaborative and, interestingly involved a bit of family history. When I first met with Patti, she shared this history with me.

“My mother passed away earlier this year, at age 97,” Patti explained. “She used to always pick the colors when we painted this house. She was an artist who went to art school in New York City, so, she was very good with colors.”

“But this time I thought, ‘My mother’s not here; what are we going to do?’”

In a later conversation, reflecting back on the process of working with me, Patti shared, “When you came in, it was like a breath of fresh air and things felt calm. Art and I knew it was going to be okay.”

Art added, “You were considerate about how the colors were going to look on the house itself, and in relation to each other. We appreciated that.”

During our meetings, I could tell when Art was on board, because he would watch me closely, with the kind of quiet where I knew — he was observing not just what I was saying, but also what I was feeling.

If a client is moving towards a choice that feels wrong to me, I can’t hide it! I’m like an open book. My feelings about color are in my body. Art could see my reactions happening in real time. So he trusted me. He described, “When you knew something was wrong, you would give us a certain look. And when you knew it was right, you’d say it, ‘That’s the one you should go with!’ And so, we trusted you.”

It’s the kind of relationship every designer hopes for: I say what I think is true, they consider it and try it on and then we agree! No second guessing. I really appreciated that about working with Patti and Art.

From the beginning, we agreed that we wanted a timeless look. After all, the house was built in 1905.

“It’s not a Craftsman just for the sheer size of it,” Patti had explained. “My folks did the addition, but it has so many different ornamental styles with the leaded glass and this and that — the geegaws, as I call them…. Including the lions. Many members of our family are Leos — they’re all born in August: my stepfather, my stepbrother, my mother, and our youngest son. They’re all lions! So, it’s a family icon.” 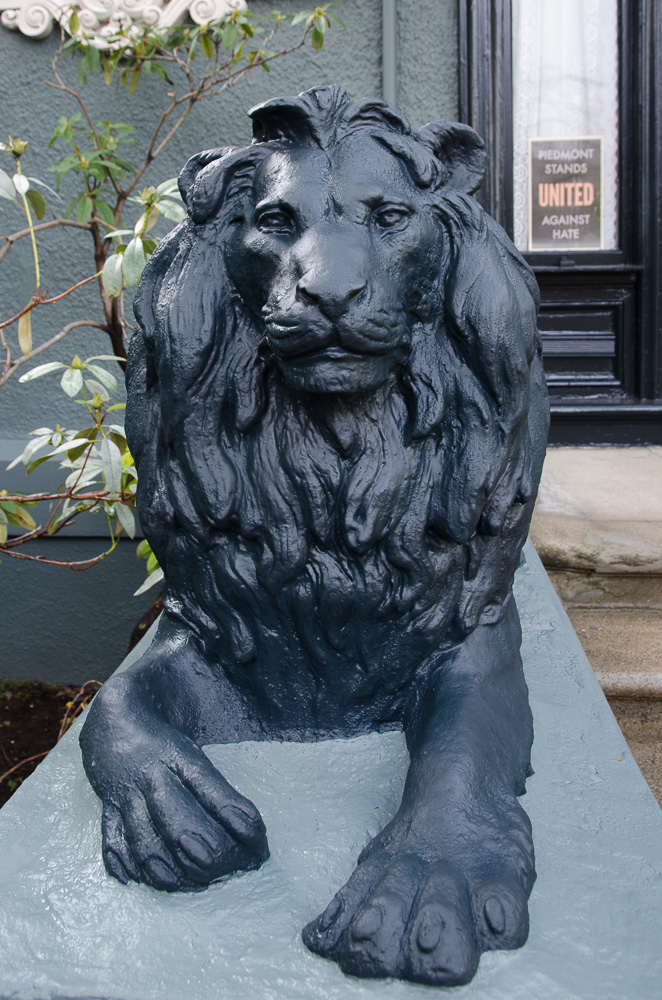 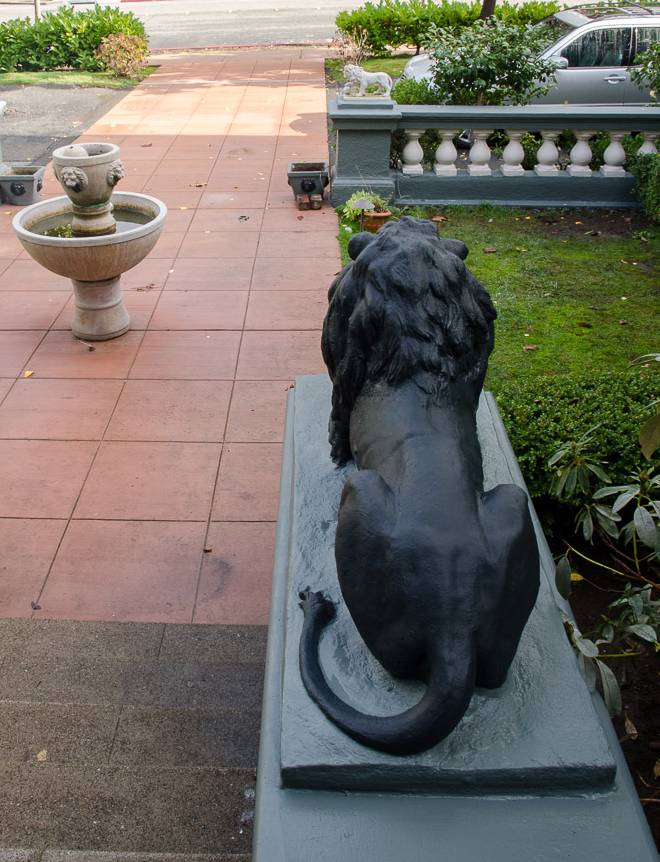 While I knew my instinct about choosing black for the lions was the right one, I respected that this decision would take time and care. Patti shared photoshopped images of the three options with her two sons, and asked them to vote on the color.

Everyone agreed on black. And Patti was very pleased by the results. She reported, “I wasn’t sure at first, but now… Oh my god, they look fabulous!”

“The color of the lions was actually the last thing we decided upon,” noted Art. “We just really didn’t know what would work. We finally settled on the French look, which was the black lions.”

“My mother’s lineage traces back to France, so it made sense,” Patti added. “We knew whatever decisions we made, the colors we chose were going to be important. In fact, during the painting process, as it went along, we were getting emails and phone calls from neighbors saying, ‘You’re not painting it yellow, are you?’ — because they were responding to one of the undercoats!

“But once the house was finally getting done, people stopped at the red light would call out to me, ‘Patti, it’s looking great!’ — or as they came around the corner, they’d honk and give us a thumbs up!”

As you can see, MB Jessee did an extraordinary job. How could anyone not be thrilled with the results?

Are you planning to paint the exterior of your home? It’s never too soon to think about choosing exterior colors. Let us know if we can help.

A version of this article originally appeared in the Piedmont Post.